The AOCS determines the attitude of the XMM-Newton spacecraft while in orbit, based on the information from one of XMM-Newton's two star trackers (which are operated in cold redundancy) and its ``Fine Sun Sensors''. During slews and the post-slew phase (comprising attitude determination, trim, and settling of the spacecraft), entries are made into the Attitude History File (AHF) every 10 seconds. Note that during slews the AHF will not contain attitudes reconstructed from actual AOCS telemetry, but the results of a slew time/path predictor, based on the actually observed slew start/end times and attitudes. The accuracy of the attitude reconstruction during slews is expected to be better than 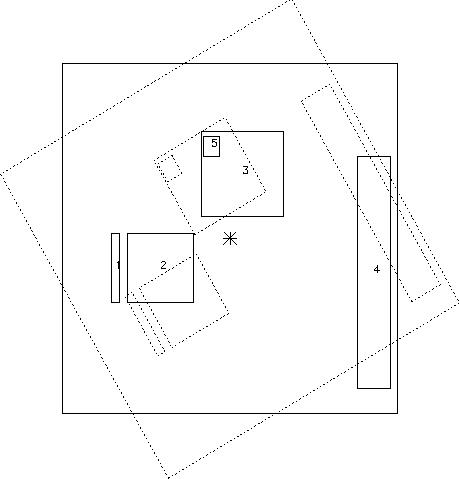 In the ``stable pointing mode'' (i.e., after the slews and the post-slew phase), the conditions under which entries into the AHF are made are optimised parameters. An entry is made into the AHF only in case of Relative Pointing Errors (RPEs) exceeding the programmed limit. The minimal programmable limit (i.e., the smallest programmable deviation from the nominal boresight) is

. The minimal time resolution with which entries into the AHF can be made in case of such instantaneous excursions is 2 seconds. For a single nominal pointing entry, only a mean RPE will be provided.

The AOCS attitude information is independent of that from the OM's star tracking windows (§ 3.5.9).

The AHF is a file containing processed AOCS telemetry. Clipped to the start/end times of an observation or slew, the complete AHF for the relevant revolution becomes an ODF or SDF component which is delivered to the observer. For ``stable pointing periods'' the data records identify intervals of time during which the spacecraft's boresight did not deviate by more than a configurable limit from the mean boresight during that period. For open loop slews and post-slew attitude trims, the AHF provides the instantaneous boresight at equidistant points in time (typically 10 seconds). It should be noted that attitudes for open loop slews are derived from a ``slew model'' into which the boundary conditions (actual start/end times and attitudes) have been entered, i.e., the intermediate attitudes provided for slews are not based on sensor data telemetered during the slews.

It should be noted that there is an additional file that holds attitude data, which can be used by the SAS. This is the so called Raw Attitude File (RAF) which provides the attitude information at the maximum possible rate (one entry every 0.5 s). The AHF is in fact a smoothed and filtered version of the RAF. The online documentation of the SAS package oal (section on SAS_ATTITUDE) gives further info on how to select amongst the AHF and RAF source of ODF attitude data.